A new report by a trio of preservation advocacy groups offers best practices for the expansion of utility-scale solar energy, so the growth of this important 21st century infrastructure will not encroach on Virginia’s many historic landscapes and resources. In fact, the movement toward renewable rather than finite energy resources is more than compatible with historic preservation — proactive consideration of the past can even increase the likelihood of permitting success for such projects. 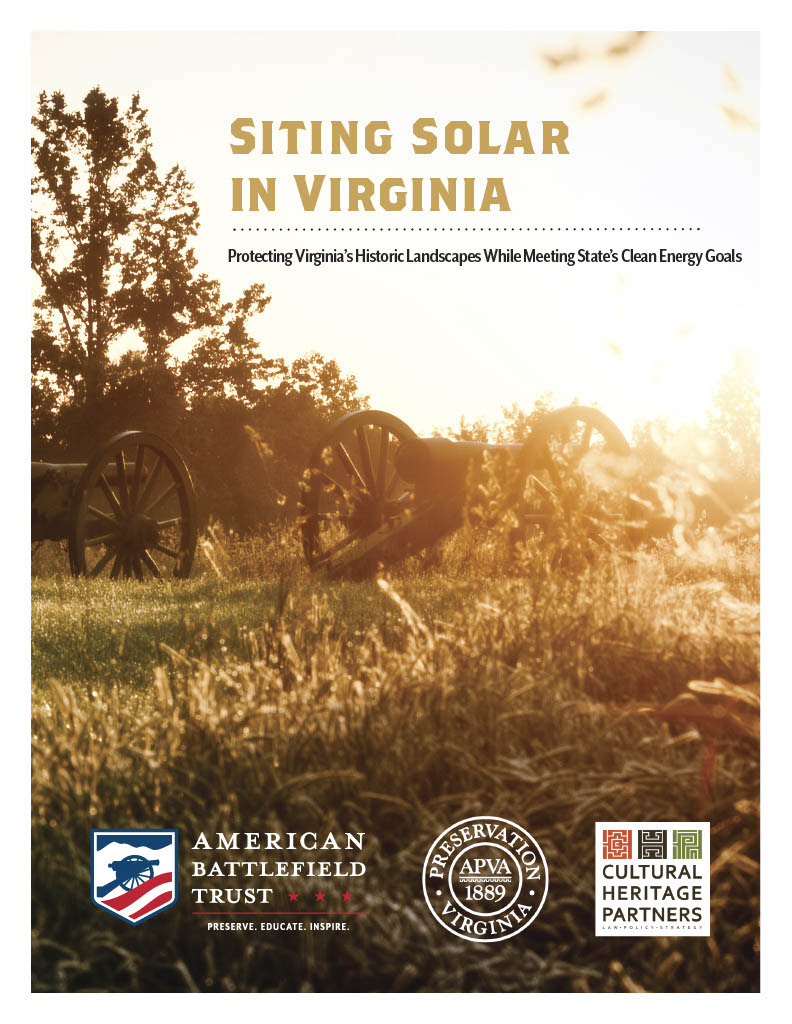 Clean Energy Goals, the American Battlefield Trust — a Washington, D.C.-based nonprofit dedicated to protecting hallowed ground dating to the Revolutionary War, War of 1812 and Civil War — Cultural Heritage Partners, a law and policy firm with offices in Washington and Richmond, and Preservation Virginia, the nation’s oldest state-wide preservation organization, offer a roadmap for how utility-scale solar developers can thoughtfully address historic resources in their projects and help distinguish themselves as leaders for the rest of the country on solar projects. END_OF_DOCUMENT_TOKEN_TO_BE_REPLACED

Forrest’s statue in Memphis, circa 1900 (Library of Congress)

Paul Ashdown and Ed Caudill are co-authors of the latest book in the Engaging the Civil War Series, Imagining Wild Bill: James Butler Hickok in War, Media, and Memory (Southern Illinois University Press). Yesterday, they explained their “manticore” metaphor and how figures such as Sherman, Mosby, Forrest, and Custer fit that metaphor—a metaphor Hickok now fits, too.

These and other Civil War figures all live in befogged public memory thanks to earnest historians and laboriously footnoted tomes, but much more so, as novelist David Madden contends, due to film, fiction, television, re-enactors, highway markers, and innumerable other stokers of the popular imagination. Public memory is mercurial, but its foundation in particular myths is predictable.[1]

For example, Forrest has been banished from his namesake park in Memphis, with his bones shunted to a corner of his hometown’s memory and his bust carted from the legislative Rotunda in Nashville to the basement of a state museum. History turned—as did public memory—from recalling the heroic cavalryman of the Lost Cause to emphasizing his more sinister role as slave trader and Klansman. And so the monuments to his legend must change or disappear. His days are numbered. The myth did not change, but values attached to it did. Earlier, the individual, the general who rose from poverty to prominence, appealed to fundamental and constant cultural values. But when society elevated and broadened egalitarianism, Forrest’s impedimenta devalued his monuments. The fate of Forrest’s memory parallels the fate of the Rebel flag. Media memory factories have memorialized the Civil War and the warrior culture of the Lost Cause. But the storyline changed, and the factories are retooling.[2] END_OF_DOCUMENT_TOKEN_TO_BE_REPLACED

A new six minute video highlights some of the 2,200 flags preserved in the Flag Room of the New York State Capitol. Most of the flags were used by New York troops from the War of 1812 through the modern conflicts in the Middle East, including many from Civil War regiments. END_OF_DOCUMENT_TOKEN_TO_BE_REPLACED

Echoes of the Reconstruction Era: The 1876 Election—“A Dead Radical Is Harmless”

The cartoon “A National Game That Is Played Out” by Thomas Nast appeared in Harper’s Weekly Dec. 23, 1876. The cartoon depicts the ballot box as a football being kicked around by politicians.

The Election of 1876 was the most contentious in United States history. While Lincoln’s election in 1860 had more tumultuous consequences, once the Democratic Party split into its “National” and “Southern” wings, Lincoln’s victory was assured. The winner of the 1876 race was hardly certain for nearly four months after the citizenry had cast their ballots. Even the method for determining the victor was in doubt for months.

I want to look at the days leading up to Election Day on November 7, 1876 ,and the thirty days immediately following. These weeks did not resolve the electoral crisis; they only set the stage for the struggle in which neither side would concede defeat, and both parties used every means at their disposal to try to conjure victory. As usual, you can find my sources by following the links. END_OF_DOCUMENT_TOKEN_TO_BE_REPLACED

Posted on December 3, 2020 by Chris Mackowski

Paul Ashdown and Ed Caudill are co-authors of the latest book in the Engaging the Civil War Series, Imagining Wild Bill: James Butler Hickok in War, Media, and Memory (Southern Illinois University Press). In yesterday’s opening part of their series, they touched on the quartet who’ve been the focus of their earlier work: John Mosby, Nathan Bedford Forrest, William T. Sherman, and George Armstrong Custer.

Part Two: Of Myths and Manticores

The four figures we’ve focused on—Mosby, Forrest, Sherman, and Custer—comprised, in myth and memory, what we came to think of as our metaphoric manticore, a heraldic beast with a human head, and the body of a wingéd lion with a scorpion tail. The manticore was, in legend, a killer dredged up from the unconscious to devour its prey and leave no scraps. Each of our protagonists represented aspects of the manticore in high relief. Each had been re-imagined in public history, journalism, and literature, and often made congruent with ideologies coming to public attention through the bellows of the press. The way they had been re-imagined told us much about the meaning of the war in public memory and the durability of myth.[1] END_OF_DOCUMENT_TOKEN_TO_BE_REPLACED

The Lost Cause of John McCausland

The Confederate Army’s John McCausland waited on the outskirts of Appomattox on Sunday morning, April 9, 1865. At that point, the brigadier general’s command, in his own words, “was reduced to a mere skeleton of 200 men.” When news reached him of Lee’s surrender, he knew it was all over. McCausland turned to the man next to him and said, “Let’s get out of here.”[1]

General McCausland, pictured here, earned the nickname “Tiger John” from his troops. To southerners, he’d be remembered as the savior of Lynchburg. To northerners, he’d always be the destroyer of Chambersburg. (Washington & Lee University Digital Exhibits)

END_OF_DOCUMENT_TOKEN_TO_BE_REPLACED

Book Review: “Tullahoma: The Forgotten Campaign that Changed the Course of the Civil War, June 23—July 4, 1863”

When one thinks about June-July 1863, inevitably Gettysburg and Vicksburg come to mind. Between the bloodiest battle of the war and Federal forces gaining control of the Mississippi River, that is understandable. But in the shadows of those two giant clashes was a third campaign that saw Maj. Gen. William Rosecrans’s Army of the Cumberland thoroughly outmaneuver rebel forces out of Middle Tennessee and nearly out of the state entirely.

But the Tullahoma Campaign, as Rosecrans’s movements came to be known, has never really gotten the credit it deserved. If anything, it garnered just passing mention in most histories of the Civil War. But now, because of the work of David Powell and Eric Wittenberg, that has changed.

END_OF_DOCUMENT_TOKEN_TO_BE_REPLACED

Here’s what our friend Brian Swartz was up to in November at his blog, Maine at War:

Among the 50 Union graves identified on the recently discovered Antietam burial map is that of Asa Reed, a young 10th Maine Infantry private. END_OF_DOCUMENT_TOKEN_TO_BE_REPLACED

When John Brown’s body dropped through the gallows’ trap door in a field outside Charlestown, Virginia, at approximately 11 a.m. on December 2, 1859, only about 1,500 Virginia militia, Virginia Military Institute Cadets, and a handful of United States soldiers witnessed Brown’s last breath escape his body. Virginia Governor Henry Wise made it so. In fact, he wanted it that way. No civilians, just the military. (Wise was worried about rumored abolitionists who might try to free Brown at the last minute so he banned any civilians from attending the execution.)

Though most Americans did not see Brown’s final moments in person, they did not pass the time idly by. Bells echoed across the North at the hanging hour. Businesses closed. Churches held prayer services. Brown might have died in a field guarded by armed militia but more than 1,500 eyes were focused on the Charlestown gallows at the time of his execution. The North observed his death with solemnity while Southerners observed Brown’s hanging with one eye and kept the other watching the reactions of the North. Brown’s trial, not his raid, made him a martyr in the eyes of some Northerners, a sizable enough portion to make Southerners weary of Brown’s increasing popularity. END_OF_DOCUMENT_TOKEN_TO_BE_REPLACED

CWRT Congress: How Do You Know What You Know?

“How do you know what you know?” That seems like a crazy question to ask those of you who have been involved in your CWRT for so long. But, let me explain my point. All too often, we rely on intuition about which months are the best to hold meetings, the type of subject matter members like best, who the speaker should be, etc. But is that really the best way to operate?

I’m suggesting that it’s not. Simply put: things change. For example, fewer and fewer people read the daily newspaper to find out about public events. Fewer people carry cash or write checks when making purchases. And heavy traffic and the scarcity of parking have become big barriers to many.