Last week the American Battlefield Trust announced an amazing preservation opportunity at Bristoe Station. Currently, the only portion of the battlefield preserved is 140 acres that makes up the Bristoe Station Battlefield Heritage Park. This land was preserved by the Civil War Trust in 2005 and now managed by the Prince William County Historic Preservation Division (currently, Emerging Civil War author Kevin Pawlak serves as the Site Manager for the Park). This opportunity will add a total of 152 acres of preserved land to the battlefield park.

The Battle of Bristoe Station, fought on October 14, 1863 was a major Confederate defeat for the Army of Northern Virginia as it chased the Army of the Potomac northward towards Centreville. Using the Orange and Alexandria Railroad as a defensive position, the Union Second Corps under General Gouverneur K. Warren were able to repulse a hasty assault by A.P. Hill’s infantry. Nearly 1,500 men were casualties within 30 minutes. The bloody repulse shocked the Confederates and allow Warren to escape that night and join the rest of the Army of the Potomac in Centreville. A few days later, Lee ordered the Army of Northern Virginia to return southward to Culpeper – never again would Lee hold the initiative. 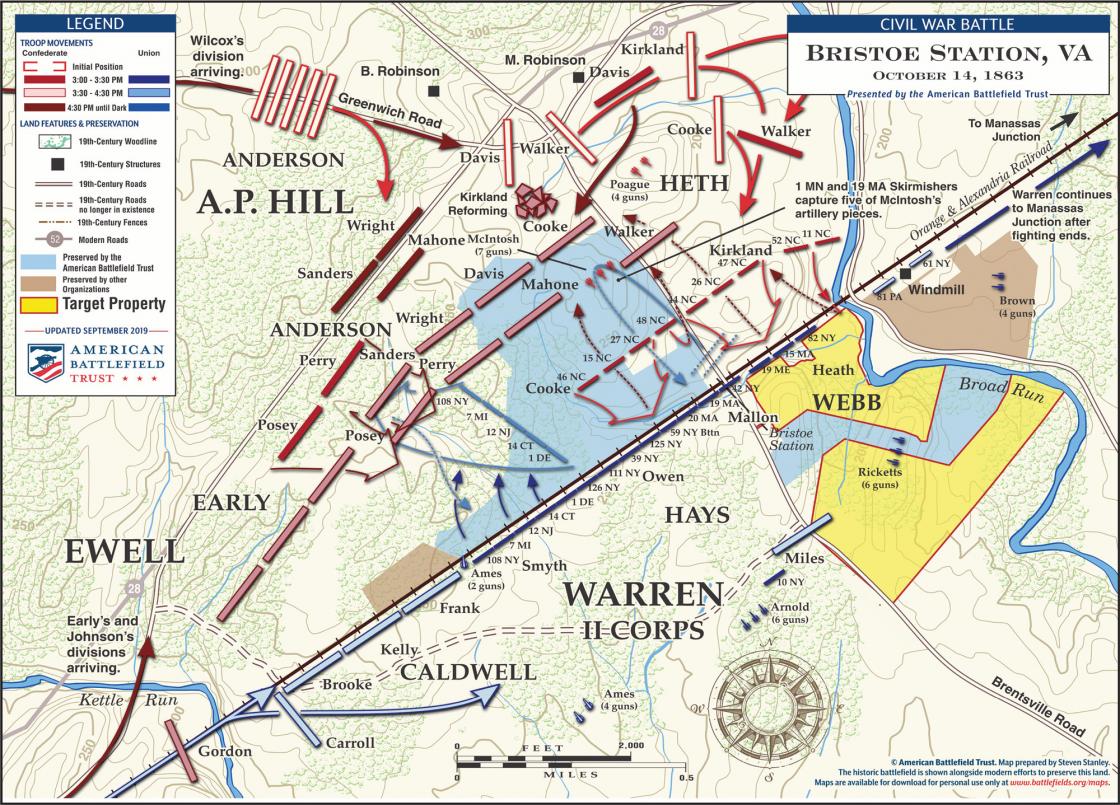 This new land includes the Union side of the railroad. For the first time, the Union portion of the battlefield will be preserved and interpreted. On this land two men earned the Medal of Honor. The infantry division of Alexander Webb were posted here along the railroad. Behind them on two ridges, artillery of Fred Brown and Bruce Ricketts were posted.  Also, this land includes portions of the August 27, 1862 Battle of Kettle Run and multiple Civil War era encampments.

The American Battlefield Trust is conducting a fundraising campaign now to raise funds to assist with the purchase of the land. In an amazing opportunity, every dollar donated equals $539 towards preservation. Meaning only a total of $29,000 needs to be raised to purchase this crucial piece of the battlefield. To learn more and donate, visit: https://www.battlefields.org/give/save-battlefields/save-118-acres-bristoe-station

To learn more about the Campaign and Battle of Bristoe Station, be sure to read the Emerging Civil War Series title “A Want of Vigilance” by Bill Backus and Rob Orrison.