I love books. I mean really love books. They’re everywhere in my house, in nearly every room. I always loved to read and loved having books, but really got into collecting while in my first Park Service position after graduate school. The purchase that got it started was a set of Battles & Leaders. I just loved having it in my house, I could use it anytime, without having to go to the library.

Early in my career as a seasonal ranger without future employment lined up, when the choice was groceries or a book… the book won out. I may or may not have thrown away clothing on trips to fit books into the suitcase . . . multiple times.
Over time I’ve acquired a lot of books, and now it truly has achieved the level of a library. Like many of us, it is chronologically organized, from ancient to modern. Much of the collection is purely for research, some books are for reading. I have no idea how many I have, I can’t count that high.

When my avid collecting began in the 1990s, research on the internet was not nearly what it is today. We all do a great deal of online research, it is essential. Yet I much prefer holding a book in my hand to reading on a screen. And while a laptop is mobile, I love the ease of walking around with a book, taking it anywhere, and not worrying about power or connectivity. Day in and day out I am constantly reaching for something while working on something for ECW, ERW, other groups I write for, book projects, and since March- for work.

I have several collections, and between those and the internet, I can research away on many topics. Actually, I could probably hold out for weeks just researching in my library, so long as there’s food and water.

Some of my favorite sources are the OR and Confederate Veteran. I was fortunate enough to get both sets a few years ago. I have a few other helpful Civil War resources: the Time Life Civil War Library series, the South Carolina UDC Recollections and Reminiscences series, Battles & Leaders, and most of the old 1960s NPS handbooks. 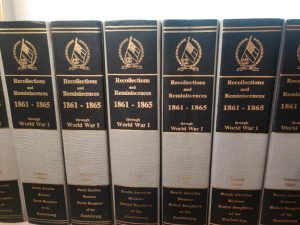 A special edition, limited run of primary sources from South Carolina soldiers, Recollections and Reminiscences is a rare and valuable source. 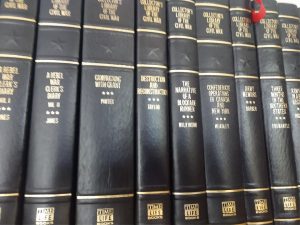 There are some great sources among the Time Life series.

I also research the Revolution and Colonial America. Thus, the Cornwallis papers are a must. I also have the Bicentennial Commemoration set of Washington’s Birthday, and a 1931 Yorktown 150th commemorative book. 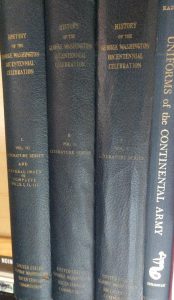 This is one of many special publications for the anniversary of Washington’s birth in 1932.

I suppose the range of sources around me shows my various interests. I have the Stackpole Pennsylvania Trail of History series, about the state’s historic sites. Over the years I’ve also managed to acquire some of the Virginia Revolutionary Bicentennial series booklets. Other collections I value include the Jamestown Rediscovery series and RBS books on the War of 1812.

Primary sources are of upmost importance, so I have several shelves dedicated to Union and Confederate regimental histories and diaries, as well as British, American, and German Revolutionary diaries and journals.

Of particular interest to me is archaeology and historic preservation. Technical reports can be dull to many, but I love them. I have archaeological reports on battlefield investigations, historic house structural reports, environmental impact statements for park development, and park planning documents like interpretive plans and exhibit plans. To me it is important to document how we know what we know, and follow the process of understanding an event or a place. These reports allow us to do that.

I approach books the way I approach history itself. Interpretations and understandings change as we learn more through further research and archaeology, as politics and society changes, and as the practice of history evolves. Therefore, old guidebooks and internal reports are fascinating to me: they show old park boundaries, old photos of how exhibits used to be set up, and the text reveals how history was understood and taught. I love nothing more than having a source on a historic site from the 1920s, the 1950s, the 1980s, and a current one, being able to compare this evolution on many levels.

What’s the most valuable book in my collection? I don’t know, but one of the most meaningful to me was discovered as a kid among family papers: Sparks from the Campfire, an 1895 publication of Civil War stories by veterans. I remember opening the delicate and fraying book for the first time and seeing the inscription in pencil: “Samuel Dunkerly of Co. F 48th Regt. PA Vet. Vols. A gift from his wife, Mary. Oct 7, 1896” 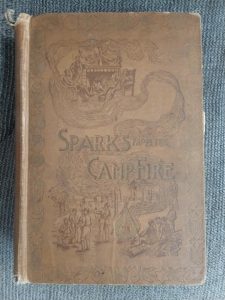 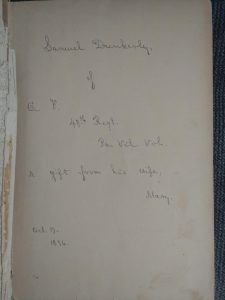 Of course I immediately researched that ancestor, and have been able to track his movements at Manassas, Cold Harbor, Petersburg, and Roanoke Island. Ever heard of the Crater? Yeah, that’s them, they dug the tunnel.

There are other unique items that I regularly use. James Deetz’s In Small Things Forgotten? Right there next to Ivor Noel Hume’s Guide to Artifacts of Colonial America. Bruce Burgoyne’s collections of Hessian diaries from the Revolution? Off to my left. A History of Underwear? Got that (hey, you never know…)

My War of 1812 section grew significantly last year after working at River Raisin National Battlefield in Michigan. A few years ago I was on a King Phillip’s War kick. Its bigger than my Spanish-American War or Mexican War sections. The French & Indian War occupies four shelves. NO FICTION, only real history here. A fiction book would be banished faster than a Cleveland Browns fan.

The best part about all this? The view. Looking out my window is Libby Park, where American militia fled the British in 1781, and in 1865 the 9th Vermont camped. To me it is an inspiring place to write.

So most nights, especially since March, this is where I am, surrounded by books, reports, and journals. Then there’s maps, newspapers, old photos, and old postcards, but that’s for another post.