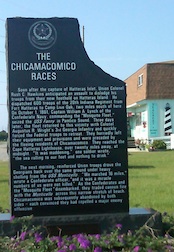 In the late summer of 1861, an incident occurred on Hatteras Island known as the Chicamacomico Races. It happened this way: By the end of August 1861, Union forces were in control of Hatteras Island on the Outer Banks of North Carolina. Colonel Rush Hawkins of the 9th NY Vol. Infantry was concerned about defending the island against Confederate attempts to recapture it. As a precautionary measure, he established an outpost at Chicamacomico (near the present day village of Rodanthe) at the north end of Hatteras Island. Despite objections by Colonel W. L. Brown of the 20th Indiana, Rush Hawkins assigned Col. Brown and his men to this isolated outpost. This new encampment, called Camp Live Oak, provided a means of warning against movement of Confederate troops from Roanoke Island.

On the morning of October 1, 1861 the Federal tug boat Fanny sailed north from Hatteras Inlet, on Pamlico Sound, to deliver supplies to Col. Brown and his men at Camp Live Oak. Upon arriving at the encampment they began unloading supplies. Suddenly they came under fire from three Confederate steamers. These steamers were some of the vessels making up the Confederate ‘Mosquito Fleet.’ They included the Curlew, Raleigh, and Junaluski. They had spotted the Fanny as she sailed north and followed her. As the bombardment continued, the captain and crew of the Fanny believed they were outgunned and surrendered the Federal tug. In the process of capturing the tug and supplies, the Confederates also discovered the location of Camp Live Oak and the 20th Indiana.

The capture of this Federal vessel was a morale booster to Confederate forces. Colonel Claiborne Snead of the 3rd Georgia on Roanoke reported the capture of the Fanny:

It was our first naval success in North Carolina and the first capture by our arms of an armed war-vessel of the enemy….The property captured [two rifled guns and large amounts of stores] was considerable, much needed and esteemed….

The Confederate forces on Roanoke Island renewed their efforts to plan an attack on Camp Live Oak and to recapture all of Hatteras Island. This plan also called for the destruction of the Cape Hatteras Lighthouse to prevent it from serving as a navigation aid to the Federal blockading fleet.

On the morning of October 4, 1861 Confederate forces consisting of men from the 3rd Georgia and 8th N.C. were loaded aboard vessels on Roanoke Island. They sailed south on Pamlico Sound and arrived off of Chicamacomico later that morning.  The transports carrying the troops got as close to shore as possible. However, since the tide was low they were still about a mile from land. The 3rd Georgia struggled to wade ashore in waist deep water. They were spotted by men of the 20th Indiana, who panicked and ran south as fast as they could  They raced along the ocean side of the island in order to put as much distance as possible between themselves and the enemy.

When local families saw the panic-stricken men of the 20th Indiana fleeing south, they responded in like manner. They had all taken an Oath of Allegiance to the Union and feared the Confederate response. The weather that day was extremely warm and humid. Many soldiers and civilians quickly became exhausted from the heat and running in the hot, soft sand of the beach. Some eventually collapsed completely.

Meanwhile, the 8th N.C. troops continued sailing south in an attempt to cut off the retreating soldiers and civilians. They, however, faced the same problem of low tide and having to wade a great distance to shore. The slow process of reaching land enabled most of those fleeing south to outrun their pursuers.

Later that afternoon, word of the Confederate attack reached Fort Hatteras. The Federal gunboat Monticello was sent north on the ocean side of the island to provide cover fire and protection for the retreating 20th Indiana and local residents of Chicamacomico.  David L. Brain, in command of the Monticello reported,

we discovered several sailing (rebel) vessels over the woodland Kinnakeet, and at the same time a regiment marching to the northward, carrying a rebel flag in their midst. As they came out of the woods Kinnakeet we ran close inshore and opened a deliberate fire upon them…at our first shell, which fell apparently in their midst, they rolled up their flag and scattered. (NAVY O.R. SERIES I – VOLUME 6 , p.292)

Accurate and intense fire from the guns of the Monticello caused Confederate troops and ships to stop their pursuit. They switched direction and raced to the northern end of the island as quickly as possible. The guns of the Mosquito Fleet were no match for the Monticello. The Confederates waded out from shore to their transport vessels in order to escape the intense bombardment from the Federal gunboat. Once aboard, they sailed back to Roanoke Island unable to carry out their plan. Hatteras Island remained under Federal control for the duration of the war.

All were exhausted from the race.

1 Response to The Chicamacomico Races