On May 23, 1862, Stonewall Jackson swept down from the Shenandoah Valley’s Massanutten Mountain into the shocked Federal garrison in Front Royal commanded by Col. John Reese Kenly. Jackson, with more than 3,000 men, overwhelmed Kenly, with about 1,000 men, with relative ease, and the victory opened the door to a Confederate march on Winchester twenty miles to the north.

Little remains of the battlefield today, but I have to give a big shout-out to Civil War Trails. Thanks to an excellent trail layout, a visitor can trace the action from south to north through town and beyond. The Civil War Trails signs were especially welcome because the town offered little else to guide anyone following Jackson’s footsteps.

U.S. Route 340 rolls its way north from Luray paralleling the windier loops of the south fork of the Shenandoah River. Massanutten Mountain, along on the river’s far bank, seems to roll alongside like a pod of whales, constantly sliding up out of the water to breech, breath, and submerge, only to slide up out of the water again.

In places, Rt. 340 snakes along rocky ledges and through close-pressing arches of trees; elsewhere, when it runs through open country, it stretches its shoulders wide to let the light and panoramas in. 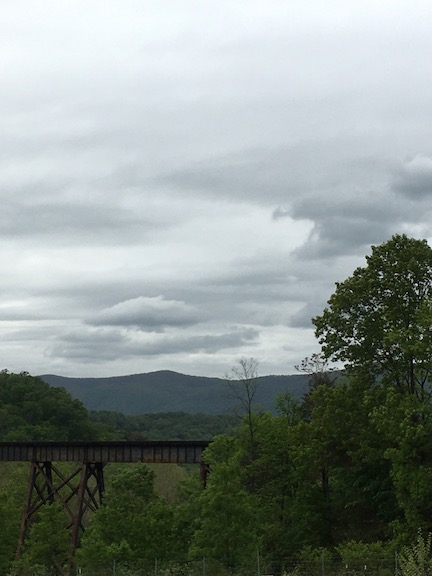 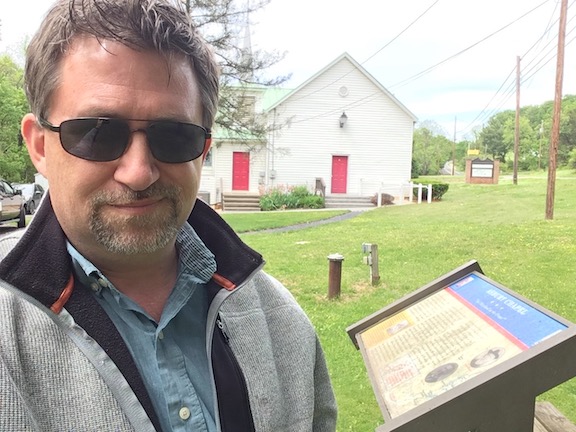 At Ashbury Chapel—the first Trails site coming into town—Stonewall Jackson halted his column before making his final push. Here, he brought the First Maryland Infantry (C.S.) to the front of his column. He also found a local guide, recommended by the pastor of the church, to led him the last few miles into Front Royal. The modern church sits on the historic church’s foundation. 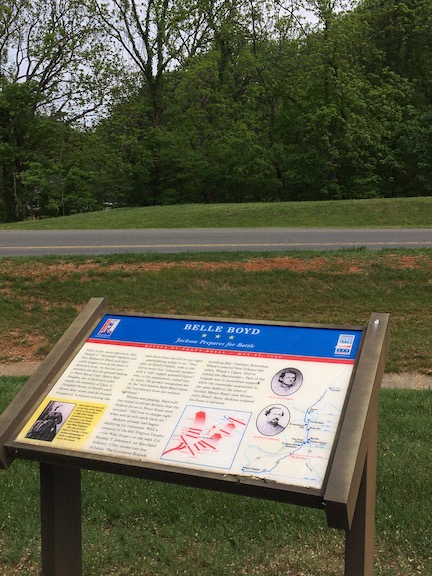 18-year old Belle Boyd intercepted Jackson’s column on the edge of town to offer details about Federal dispositions. Her intelligence confirmed what Jackson already knew, making him even more confident of his chances of success. In relation to the sign in the photo, Boyd would have approached from a hillside just beyond the left edge of the photo. 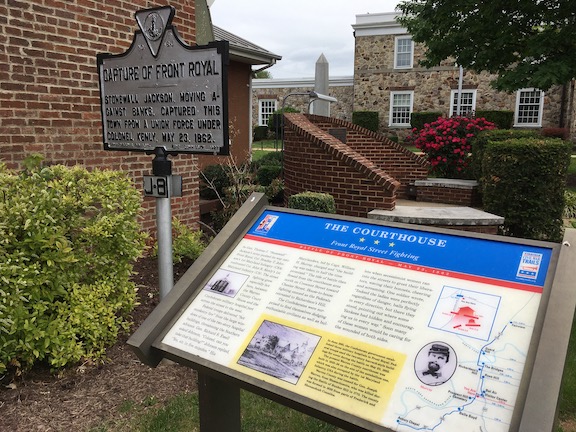 The Civil War Trails marker brought me first to Prospect Hill Cemetery, then into the heart of downtown Front Royal. It’s a quaint little main street with some nice shops and restaurants (under other, non-pandemic circumstances, it would’ve been a great place to find a bite to eat). The Trails marker (above) sat on the grounds of the Warren County Courthouse (below), where a number of war memorials honor Warren County residents who’ve served. 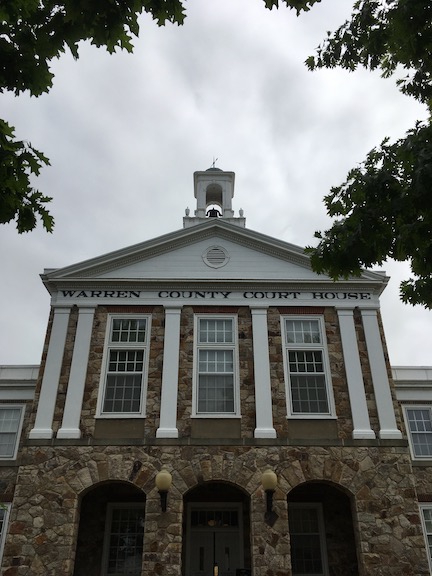 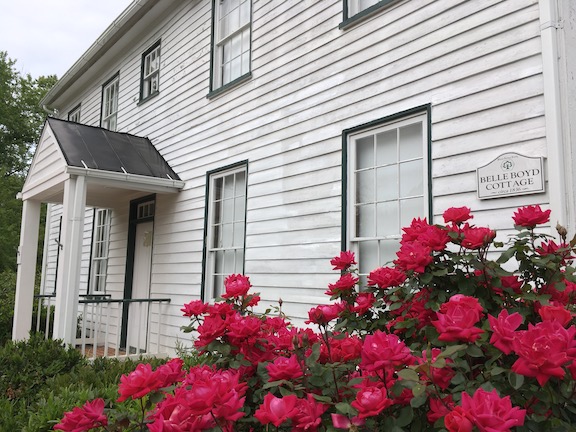 The Warren Heritage Society operates a small complex of buildings on Chester Street, including Ivy Lodge, an archive, and the Belle Boyd Cottage (not to be confused with the Belle Boyd House in Boyd’s hometown of Martinsburg, WV). The Boyd Cottage does not sit in its original location but was instead moved to the museum’s ground in 1982. The non-affiliated Warren Rifles Confederate Museum is nearby. 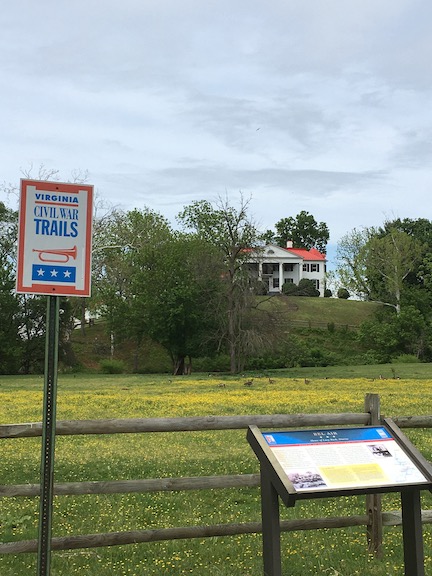 From its high perch, Bel Air, own by the Buck family, overlooks a field of buttercups and geese. Teenager Lucy Buck, a daughter of the owners, wrote one of the best eyewitness accounts of the battle. During the fight, the home came under Federal artillery fire as Kenly tried to stave off Confederate forces advancing from this direction. 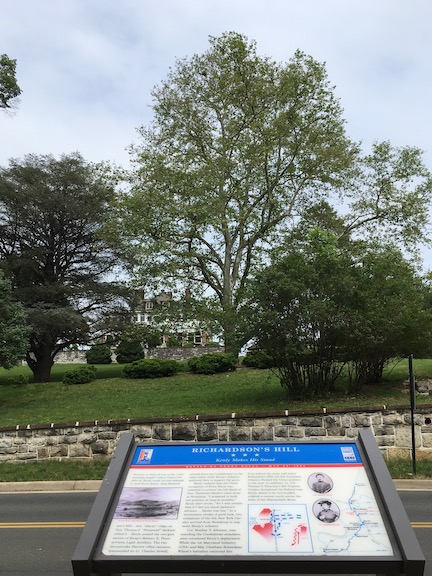 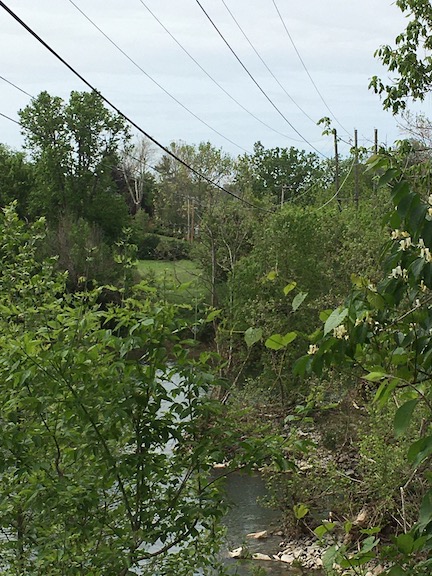 While I could get down to the site of the river crossing, the Trails markers at least brought me to the banks of the river. Kenly’s men tried to burn the wagon bridge that crossed here, but Jackson’s men doused the fire in time, allowing them to continue their pursuit. A railroad bridge slightly downriver also offered Jackson’s men an avenue to cross. The wagon bridge did eventually fall into disuse. Its pilings are still visible in the river today from the modern bridge (below). 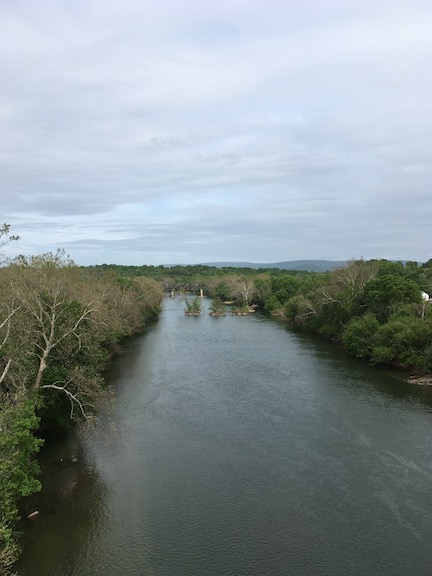 The Richards House, on the north bank of the south fork of the Shenandoah River, provided a moment of respite for Jackson after the battle. While seated on the porch, he reportedly wrote Belle Boyd a thank-you note for the information she provided him. (This wasn’t a Trails site, I admit; I was trying to find the confluence of the north and south forks and stumbled across this house, which I’d read about while doing my homework for the trip.)

My thanks again to Civil War Trails for helping me navigate my way through Front Royal’s otherwise-hidden Civil War story.

2 Responses to Looking for the Battle of Front Royal