During an August 2018 visit to the Ogden Museum of Southern Art (located next door to New Orleans’ Civil War Museum at Confederate Memorial Hall) I encountered the work of David Knox. He takes photos from the Civil War to create ghostly collages. I found the work unique and compelling. I asked Knox if he would be willing to discuss his work and he agreed.

Here is our conversation:

I grew up in Oklahoma and, after pursuing a left brain degree, spent most of my 20s in Texas and on the East Coast working in the import/export business. Photography had always been a hobby and about the time I hit 30 I realized two dreams by moving to the South and returning to school to study 19th century photography. I’ve always been fascinated with not only the early photographic processes but also with the American Civil War.

I did. I grew up with family stories about my mother’s great-grandfather, a lieutenant colonel in the Confederate army, who was killed in the Battle of Wilson’s Creek in Missouri. I also had a great-great-grandfather on my father’s side of the family who fought in a regiment from Baton Rouge. I was fascinated with the battlefields of the Civil War as well as the history, culture, and topography of the Deep South.

Beginning in the 1990s I spent about a decade driving the backroads of the South photographing landscapes and architectural ruins with a Polaroid Land Camera. I had such a large library of these single images that I began experimenting with photocollage when I went to graduate school for my MFA in 2003. This was also about the time when photography switched from analog to digital greatly expanding the possibilities of the collage process. I was particularly interested in combining my work with that of the beautiful and mostly undiscovered and unseen images from the Civil War photographers. 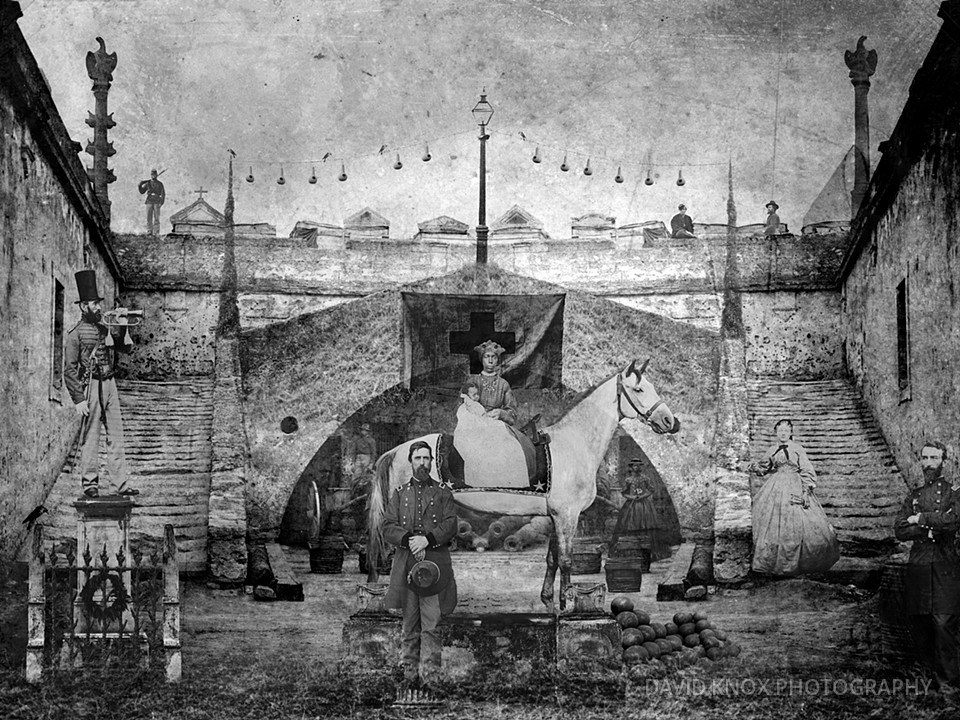 It’s great that you can recognize them – I feel like I am working with a set cast of characters in a play – most of whom I know well after all these years. It is an exhaustive process that requires a lot searching for the perfect subject for the story of the collage. Initially I begin looking for the general type of person that I want in the piece: man, woman, child; African American, caucasian; enlisted soldier, officer, civilian etc. Then I have to take into account the technical aspects of the individual in the image such as focus, exposure, angle, lighting, pose, etc. Many factors such as scale can be altered with the computer but these technical elements from the original photograph must be fairly similar to the subject’s place in the new image to work successfully.

That’s tough – as of yesterday I’m up to 29 collages. I have a few: I love the very first one I
did, Sounding of the Sixth Trumpet, because the original historic image is so mysterious and incredibly unique with its four small children, backs to the camera, facing 7 soldiers on horseback across a river. I really wish I could’ve been there that day as a hidden spectator – I find it fascinating. I also like The Fall of Leviticus since I was able to place a slave in tattered clothing atop a tall column and make him the recipient of a celebration. I have several along this same theme – it’s gratifying to be able to give these enslaved individuals some dignity 155 years after their existence in a world which gave them none.

You are exactly right – more so as a reference to the place in the Bible: “a portable tent within a walled compound” as is evident in the image. It’s also my only piece with a direct reference to a specific Civil War battlefield. There are no images from the Battle of Shiloh itself in the piece; it’s more of a symbolic reference combining the name Shiloh, the battlefield, and the walled city from the Bible. The two soldiers in the piece, arms locked together, are standing just outside the safety of the stockade in front of their tent and their bounty of fish and game. They are the main participants of a ceremony, a union, a celebration, a marriage between north and south witnessed by a small girl with dead flowers, two dogs, and several birds. In this piece and in all of my work I incorporate a lot of symbolism – often conveyed by Southern iconography – as well as subtle clues to the story from the titles, many of which come from the Book of Revelation. 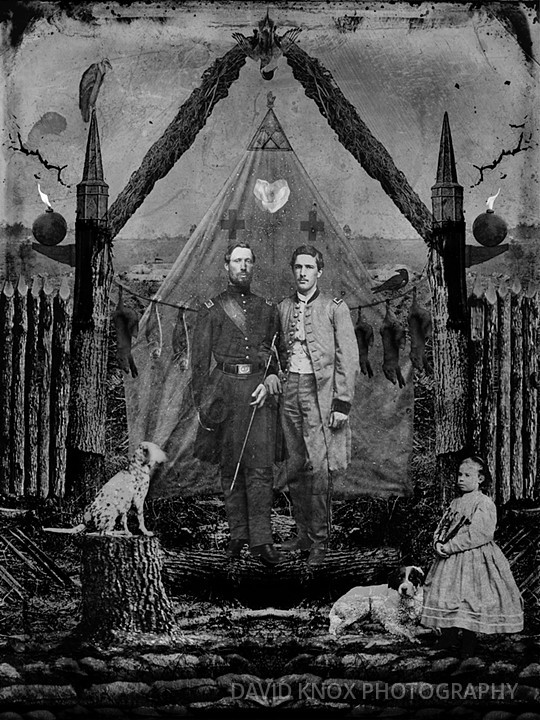 I did not know about the Civil War David Knox until I came across one of his images a few
years ago – it was a big surprise! I have not used any parts of his images yet but I definitely plan to someday.

I’ve seen a few. It’s interesting to see them progress along with technology. I’ve altered
several of my own subjects by adding hats and changing clothing etc. in order for them to better fit and/or show up in their surroundings. (I haven’t switched any heads though).

It is definitely an ongoing series. As you and your readers know there is an enormous
amount of photography from the American Civil War each containing countless elements.
Although my work changes with each piece, I create this supply will provide me with a lifetime of possibilities for this collage work.

Sure…I did want to mention that most of the final collages are made up of approximately 100 separate layers each coming from a different historic photo or from one of my photographs. Aside from the studio portraits from the north, most of the war photography came from documenting the battlefields and urban ruins of the Confederate states. As a result these pieces tell their stories through historical fiction set somewhere in the mid 19th century American South.

You can check out David Knox’s work at Knoxphoto.com