Yesterday, I sat in an archive basement, looking through material about women’s efforts to support the Union during the Civil War. Yesterday was also my Grandma Barbara’s birthday. She is no longer with us, so it was a bittersweet moment when I found a war era poem that reminded me of her.

Grandma Barbara was one of the most creative people you’d ever meet. There were very few crafts and sewing projects she didn’t try. She was also a very patriotic lady. Some of my favorite memories with her are from Fourth of July when she’d be wearing red, cheering loudly, and waving a Star-Spangled Banner. If she had lived during the Civil War era, I have no doubt she would have been knitting or quilting up a storm to support the Union…and she probably would have got her entire circle of friends motivated to the cause also.

Historically speaking, older women are often forgotten in the saga of the Civil War. Sure, there are the legendary ones, but usually when Civil War women are discussed, we remember the younger or middle age women. However, the older women made history, too – often making incredible contributions of time and materials. Abraham Lincoln actually wrote a personal letter, praising one grandmother for knitting three hundred pairs of stockings.

These older women’s letters survive, too, and often reveal wisdom and encouragement with a greater depth than sometimes found in letters by younger women. They wrote to their sons and grandsons in the army, and occasionally we’ll find soldier letters to or containing messages for “grandmother.” Some kept journals or wrote to friends closer to their own age, lamenting the loss of homes or younger family members. They had probably expected a grandson to mourn their passing, not the other way which happened to frequently because of battlefield deaths.

It is important to remember that the Civil War touched every member of American society in one way or another. Even if the popular culture of that era (and now) likes to portray younger heroes and heroines, the older men and women also made valuable contributions and heroic sacrifices to their causes.

When I read this war-era poem entitled “The Lively Old Lady” – I could re-imagine a patriotic grandmother doing everything she could to support the soldier boys. It made me feel closer to my Grandma Barbara and helped me to rethink how we remember the grandmothers from the Civil War era.

By the fireside cozily seated,
With spectacles riding her nose,
The lively old lady is knitting
A wonderful pair of hose.
She pities the shivering soldier
Who is out in the pelting storm,
And busily plies her needles
To keep him hearty and warm. 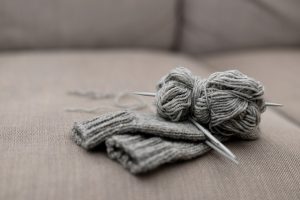 Her eyes are reading the embers,
But her heart is off to war,
For she know what those brave fellows
Are gallantly fighting for.
Her fingers as well as her fancy
Are cheering them on their way,
Who, under the good old banner,
Are saving their country today.

She ponders how, in her childhood,
Her grandmother used to tell
The story of barefoot soldiers,
Who fought so long and well.
And the men of the Revolution
Are nearer her than us;
And that, perhaps, is the reason
Why she is toiling thus.

She cannot shoulder a musket,
Nor ride with the cavalry crew,
But, nevertheless, she is ready
To work for those who do.
Her heart may be larger and braver
Than his who is tallest of all;
The work of her hands as important
As cash that buys powder and ball.

And thus, while her quiet performance
Is being recorded in rhyme,
The tools in her tremulous fingers
Are running a race with Time.
Strange that four needles can form
A perfect triangular bound;
And equally strange that their antics
Result in perfecting “the round.”

And now, while “beginning to narrow,”
She thinks of the Maryland mud,
And wonders if ever the stocking
Will wade to the ankle in blood.
And now she is “shaping the heel,”
And now she is ready “to bind,”
And hopes if the soldier is wounded,
It never will be from behind.

And now she is “raising the instep,”
Now narrowing off at the toe,
And prays that this end of worsted
May ever be turned to the foe.
She gathers the last of the stitches,
As if a new laurel was won;
Now placing the ball in the basket,
Announces the stocking is done.