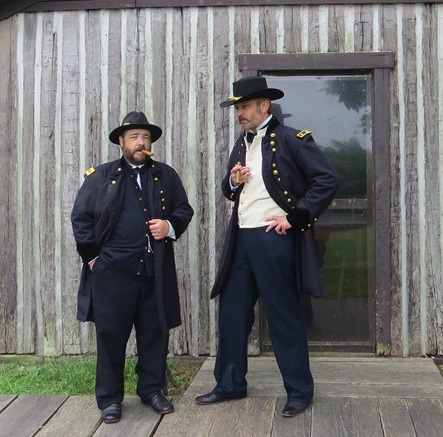 Polar opposites yet steadfast friends—Ulysses S. Grant and William T. Sherman. Now, a new play gives a glimpse into the enduring friendship of two of the Union’s most famous figures.

Now We Stand by Each Other Always is a play written by Genesee Community College professor Derek Maxfield and performed by Maxfield and fellow GCC professor Tracy Ford. Their theatre company, Rudely Stamp’d, self-describes as “a pair of eccentric college professors who want to bring the past to life with our living history portrayals.”

Their new production does just that, taking a look at the deep and lasting friendship between General Ulysses S. Grant (played by Maxfield) and General William Tecumseh Sherman (played by Ford) and how these two incredibly different and incredibly important Union figures dealt with and planned for the end of the Civil War. Framed as a series of three conversations at three pivotal points in the war, the play gives audience members a glimpse into the heads of Grant and Sherman as the two friends meet to discuss the current state of the war and their attempts to determine how best to bring it to a swift and decisive close.

Audiences will join the two Union generals at Vicksburg in 1863, Cincinnati in 1864, and City Point in 1865—three brief moments in a chaotic war where the two friends were finally able to meet face to face and reconnect. First performed in September 2018 as a one-act play, the scenes now combine to a runtime of around 90 minutes. Following the completion of the show, the performers drop their characters for an audience Q-and-A session to allow the audience to probe the players about the performance.

Maxfield said audience reception from the first few performances was so positive and had included enough requests to get a glimpse into Grant and Sherman’s relationship at other crucial moments in the war that he was inspired to extend the show to its current three acts, although the City Point act—the original one act—can be performed on its own as a shorter show lasting only 40 minutes.

For Maxfield this meant finding a place he could be alone to write. “I am the kind of writer that needs isolation in order to get my head in the right place,” he explained. “I need time to dive in and stay in the zone for a while.”

Maxfield said that his inspiration for the play was his fascination with the nature of Grant and Sherman’s friendship and their contrasting personalities. Maxfield called the pair “polar opposites.” “Grant is quiet, but resolute—a simple man,” Maxfield said. “Sherman is voluble, boisterous and impulsive.” However, despites this seeming clash of personality, the pair held deep admiration for one another and forged a bound that lasted the rest of their lives.

According to Maxfield, keeping the play based in historical fact was of the utmost importance. While Maxfield admits there is naturally a need for some historical fiction, and it would be inaccurate to say all of the dialogue is ripped straight from the historical record, he said it is close. Maxfield estimates that “70% of the words used by Grant and Sherman are either exactly what they said or wrote or close.”

Maxfield attained this high level of realism by combing through writings from the historical record such as Grant’s and Sherman’s memoirs and officer records from the events that occur in or are referenced by the show.

“For the parts where I do not have proof Grant or Sherman said something, I have to suppose what they might say under the circumstances based on my understanding of their characters and personalities,” Maxfield stated.

In addition, in order to make sure the conversations between Grant and Sherman contained enough detail and context for audiences who may not be intimately familiar with the Civil War to follow along, the script contains explanations of moments or summations of events the historical Grant and Sherman would not have needed to remind each other of but which provide context the audience might lack.

While the conversations between Grant and Sherman at these pivotal moments in the war have not been recorded, Maxfield and Ford have taken the utmost care to not only write but also perform the characters as realistically as possible.

For Maxfield, who plays General Grant, it was important to get into Grant’s head both in the writing process and during performances and to be aware of not just what Grant would have said but also how he would have acted. For instance, it was sometimes more appropriate to have the quiet, more reserved Grant “puff on his cigar and nod yes” rather than say anything, Maxfield said.

Maxfield said the decision for him to play Grant and Ford play Sherman was easy. According to Maxfield, Tracy Ford matches Sherman both in appearance and personality. “They could be twins separated by 150 + years,” he laughed As for playing Grant, Maxfield admits that, although he has spent years researching General Sherman, “being on the short side with a natural reticence, I am better suited to play Grant.”

Maxfield says that he is “incredibly proud of the play” and the excited by the audience reception. “I have earned my share of awards and accolades, but few things have been more satisfying than writing and performing Now We Stand by Each Other Always,” he said. “The reaction of audiences has been tremendous—much better than I imagined. For two egg-heads with no acting experience, we are doing alright.”

Rudely Stamp’d plans to continue putting on performances of their new play for the foreseeable future. Future performances can be found on their website: https://rudelystampd.wordpress.com/ and bookings can be done by contacting Maxfield directly via e-mail at ddmaxfield@genesee.edu or by phone at 585-293-7189.

You can read more about the production in the 2019-2020 ECW Speakers Bureau brochure.

The first Emerging Civil War Podcast for August 2019 featured an interview with Maxfield and Ford about their production.