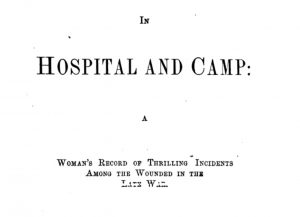 In Hospital and Camp, A Woman’s Record of Thrilling Incidents Among the Wounded in the Late War by Sophronia E. Bucklin

It’s Week 4 of our read-along. If you want to catch up on the chapter notes, just click here for the collection in the archive. This week we are looking at chapters 7 and 8.

As the chapter opens, Nurse Bucklin is still at Point Lookout Hospital on the Maryland shore and this section is full of drama within and outside the hospital.

During the incident when the hospital steward is trying to get Bucklin removed from her position, she uses the term “Dutch” to refer to his nationality. Was he actually from Holland or a descendant of people from the Netherlands? Most likely not. “Dutch” was a term used in mid-19th Century America to refer to Germans, an immigrant group that was not welcomed in certain regions of the country. The term often did not have a nice connotation. (Think of “The Flying Dutchmen” as the XI Corps of the Army of the Potomac was sometimes called.)

Summoned to see one of the hospital officers, Nurse Bucklin left the kitchen and the “ginger cakes for supper.” Most likely these were cookies, maybe a soft, cake-like cookie, depending on her recipe. Meg Groeling has written an article about ginger cookies during the Civil War; check it out in the archives.

So just what was the role of a Civil War era hospital steward? And how was he getting away with harassing the nurses? A hospital steward had a busy role in a military hospital. Basically, he served as the hospital administrator and the pharmacist. He had a lot of power and it was his job to make sure the facility ran smoothly, had proper supplies, and orderly conduct. One of his particular duties: inventory. If there was a problem with a nurse or another hospital staff member accessing supplies without permission or other disruptive behavior, the steward would correct the situation or report it to the next in the chain of command. In this case, it seems like Nurse Bucklin got set up for a problem and the hospital steward does sound quite unreasonable!

In the daily routine of our life time sped. Sometimes on swift wings—sometimes slowly creeping through dull damp days, when air and earth, and sea, were of the leaden hue of despondency. Our hearts occasionally sunk in the presence of a misery, and consequent home-sickness, which we had no power to charm away.

Did you notice something odd? Nurse Bucklin describes seeing General Burnside’s fleet for North Carolina campaign in the late winter or early spring of 1863. That’s problematic, and here’s why. Burnside’s North Carolina expedition took place in January and February 1862. According to previous writings and other passages later in this chapter, we should be in winter/spring 1863 with Nurse Bucklin since she mentioned the wounded the from the Battle of Fredericksburg (December 1862). Also, Burnside had just been relieved of command of the Army of the Potomac on January 26, 1863, and went to Ohio—not North Carolina.

What did she see? Well, she could have seen a large fleet and undoubtedly would have seen ships regularly passing the point. General Nathaniel Banks took a large force by sea to Louisiana in December 1862, but since he sailed from New York, it casts doubt if a nurse at Lookout Point could have seen the Army of the Gulf en route. I’ve been checking other campaigns and expeditions, but I’m not readily finding a match for what she might have seen within this time frame. I might be missing something though; what do you think? Or is this just an example and reminder that memoirs can be problematic since memories blur and change.

This chapter has a lot of sadness, especially with the accounts of the young soldiers’ deaths. The soldier who died with the unread letters under his pillow is a reminder that letters were the main way to communicate and that most families could not travel to be with their sick or injured soldiers. The account of the mother arriving to see her wounded son reflects scenarios that certainly did happen, but it’s important to remember that so many family members never had this opportunity, making loss without closure in many situations.

With the change of the female nurse in charge, a conflict of interest also occurred. Clearly, the new nurse matron wanted to focus on taking care of the contraband families living at Lookout Point. A noble goal, but one that was not supposed to be her primary focus. Animosity came from Nurse Bucklin and the soldiers, fueled by racist sentiments and words prevalent at that time. From previous descriptions, the contraband families living in the area needed help, and Bucklin even acknowledged that. The trouble came when the new matron spent time and resources—extravagantly as the soldiers saw it—and started to neglect her hospital duties.

Leaving the hospital due to conflicts with the new leadership and nurses, Bucklin returned to Miss Dix for directions and felt relieved that she would be allowed to continue her work in the medical field.

Under no consideration was I willing to weary of my work. So long as battles were fought, and the gory dead were hurled by the side of the quivering living, so long would be needed just such help as my hands could give, and I had no disposition to withhold it.

To be continued next weekend….