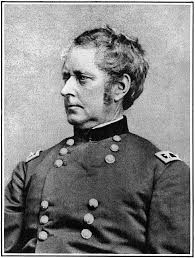 Over the weekend, the 150th anniversary of Joseph Hooker’s appointment of command of the Army of the Potomac passed. The mere mention of Joseph Hooker in relation to the American Civil War quickly conjures up the Battle of Chancellorsville and failure. This is true.

Let’s stop there and backtrack to before the campaign even started. If Hooker failed on the battlefield in late April and early May 1863, he did, however, greatly succeed from late January to the start of the campaign in mid-April in the role of an administrator.

And he succeeded because there was still an army intact after that winter that followed Hooker. That army went on a campaign that spring of 1863 in what Confederate artillerist Edward P. Alexander later remarked was “decidedly the best strategy conceived in any of the campaigns ever set foot against” the Army of Northern Virginia

Granted, Hooker was not the best subordinate officer and let his ambition for army command become well known.  Hooker had even hinted that the country (and the army) needed a dictator. On January 26, 1863 Hooker was given command by President Abraham Lincoln, who also remarked in his candid way that he would “risk the dictatorship” if Hooker could provide “military success.” Another line from that same order stands out and Hooker followed this advice to the letter and then some:“Neither you, nor Napoleon, if he were alive again, could get any good out of an army, while such a spirit prevails in it.”

The army that Hooker inherited was in shambles, morale had plummeted, the men were under-supplied, and desertions had skyrocketed. Hooker moved quickly to stem the desertion problem issuing four days after taking command an order to every regiment and battery to list its absentees by name, who was absent without leave (AWOL), and a physical description of the absent soldier. These reports were due at his headquarters by February 7th. He also had every care package from the home front routed through in provost marshal’s office for inspection to guarantee that no supplies that would aid future deserters were delivered.

As historian Stephen Sears wrote, “all this was the stick in Hooker’s stick-and-carrot effort.”

Hooker after his initial hard-line policy on desertions had enacted his own “carrot.” He issued a restructure on the furlough policy, stating that two men out of every 100 would be picked by lot and granted a furlough. The catch was that the two men chosen must return to camp before the next two who had drawn the furlough could leave. The other caveat was the unit had to pass inspection prior. 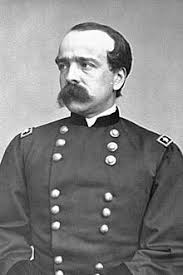 Furloughs ranged from 10 days to the mid-Atlantic states, 15 days to Maine, New Hampshire, and Vermont, and to Ohio and the western states. Another idea to boost morale was presented to Hooker by his Chief of Staff, General Daniel Butterfield. The previous year, the late General Philip Kearney had hit on the idea of issuing a colored piece of cloth for identifying men of his division. Butterfield improved on the idea.

He proposed that each corps in the army be given its own unique design. In addition, each of the three divisions within the corps would have a separate color; red for the first, white for the second, and blue for the third divisions. The men would affix the badge with the specific color to their caps but the particular emblem of the corps would also be affixed to ambulances, wagons, and artillery of that corps.

The corps badge of the First Corps was a full moon.

The corps badge of the Second Corps was a trefoil or clover.

The corps badge of the Third Corps was a diamond or lozenge.

The corps badge of the Fifth Corps was a Maltese cross.

The corps badge of the Sixth Corps was a Greek cross.

The corps badge of the Eleventh Corps was a crescent moon.

The corps badge of the Twelfth Corps was a five-pointed star.

Hooker also made changes to the cavalry division–consolidating them into one corps–under the command of General George Stoneman which enabled them in the following campaign to begin to rival their Confederate adversaries. He also beefed up the numbers and roles of inspector-generals. By consequence, hospitals, campsites, and camp sanitation greatly improved.

Even more endearing to the troops was that paydays were reestablished, new clothing was issued, and corruption and incompetence was rooted out in the commissary and officer corps respectively. Hooker was changing the Army of the Potomac by restructuring how the army was fed, controlled by the provost, inspected by the inspector-generals, disciplined, and even who retained command in the officer corps.

If that did not improve morale tremendously, the same day the reports of AWOL’s were due at headquarters–February 7th–Hooker announced that soft bread would henceforth be issued to the troops four times a week. Fresh potatoes or onions were to be issued twice a week, and desiccated vegetables delivered once a week. If these supplies were not delivered the commissary officers responsible had to furnish a written report proving that their depot lacked the necessary supplies.

Thomas Nast’s Army of the Potomac Drawing Rations
(courtesy Sons of the South.net)

Hooker understood the maxim attributed to Napoleon, “an army marches on its stomach” yet took it a step further insisting that “my men shall be fed before I am fed, and before any of my officers are fed.”

But, even a few extra items were delivered into camp. Historian John Bigelow, Jr. wrote that “tobacco, the soldier’s solace” became a regular issued item to the rank-and-file of the Army of the Potomac. Occasionally an issue of whiskey was made upon the return of soldiers from sever exposure suffered during picket or fatigue duty.

A Maine officer remarked about the impact of Hooker’s reforms, “never was the magic influence of a single man more clearly shown.”

Sergeant Edmund English of the 2nd New Jersey wrote, “I do not think it possible that such a change could have taken place for the better as has been effected in the short space of two months.”

In those two months, according to Sears, “virtually everyone agreed–and virtually everyone was surprised” that Hooker “had engineered a miraculous recovery” in the Army of the Potomac. Hooker has shown to everyone in his army that he cared for their well-being.

Hooker could then, possibly, be forgiven when he boasted that he was leading “the finest army on the planet.” Within those two months of taking command he had shown his awesome ability as an administrator. His appointment in late January 1863 saved the Army of the Potomac from melting away, a fear expressed by General Carl Schurz to Lincoln in a letter on January 24th, merely two days before Hooker took over command. And by saving the army, he arguably saved the war effort for the Union.

He may be best remembered for the lost chances, losing his nerve, and then losing the Battle of Chancellorsville. But, he was victorious in keeping the army in tact, improving its morale, and in having an army that believed in itself enough to take on the campaign. In this capacity he saved and help create the Army of the Potomac that would eventually defeat Lee’s army.

*For the picture display of the corps badges, the following link was used:
http://www.drawthesword.goellnitz.org/monument-101/army-of-the-potomac-corps-badge-system/*

3 Responses to Joseph Hooker: The Administrator