Jayhawks, Mount Oread, Legends, and Lore: The University of Kansas and Its Deep Civil War Ties

From the famous rivalry with the University of Missouri-Columbia (Mizzou) dubbed the “Border War” to the unique Jayhawk mascot, the University of Kansas (KU) has some of the most interesting traditions, mascot, and lore of all American universities. At any game in Lawrence, Kansas, you will find the iconic blue and red Jayhawk, signs that reference John Brown, and the chant of “Rock Chalk Jayhawk.” Many KU fans and Kansas residents do not actually know the stories behind the university’s folklore. In fact, like KU itself, many of these stories are deeply tied to the American Civil War – a conflict that was especially brutal and devastating along the Missouri-Kansas border.

Though the University of Kansas was not officially established until March 1865, it does have its roots during the violent antebellum period named, “Bleeding Kansas.” In 1855, just as the tensions between pro-slavery and anti-slavery settlers grew, the concept of establishing a university was first raised by the Kansas Territorial Governor Andrew Reeder. There were several communities in the growing territory of Kansas that proposed the construction of public universities, but eventually, the citizens of Lawrence made it happen. It was not until February 1863, after Kansas entered the Union, that Governor Thomas Carney signed a bill into law establishing the state university at Lawrence. Two years later, the University of Kansas was officially established by its Board of Regents.

The town of Lawrence, the site of KU’s main campus, is deeply rooted in the Civil War. Named in honor of Massachusetts abolitionist Amos Lawrence, the town became the unofficial capital of the abolitionist movement in Kansas. In fact, the leaders of the New England Emigrant Aid Society established Lawrence as a town dedicated to the cause of abolition and turning Kansas into a free state. It was due to Lawrence’s ties to the abolitionist movement that made it a target for pro-slavery Border Ruffians and Guerrillas. In 1855, and later in 1863, Lawrence was violently sacked by Guerrillas.

The name of the University of Kansas’ famous mascot, the Jayhawk, also is rooted in the Civil War. While the name’s origins are not certain, the term “Jayhawker” became the nickname of militant abolitionists operating along the Missouri-Kansas border in the years preceding the Civil War. It is said that the abolitionist former Governor of Indiana James Lane used the term to address his Free State Army. Lane later established a Federal brigade of Kansas volunteers, who were nicknamed the Jayhawkers. Lane’s Kansas Brigade was responsible for sacking the Missouri border town of Osceola in 1861. Interestingly, on the 150th anniversary of the Sacking of Osceola, the town of Osceola asked KU to revoke its mascot, but the university refused. Another abolitionist was Charles “Doc” Jennison, who organized the 7th Kansas Cavalry, also known as “Jennison’s Jayhawkers,” at the outbreak of the war. Jennison’s men fought at Iuka and Corinth, and later, throughout Major General Sterling Price’s Missouri Expedition in 1864. It was not until the 1890s that KU’s sports teams used the Jayhawk mascot. Today, the Jayhawk has been described as a combination of the blue jay and the sparrow hawk. 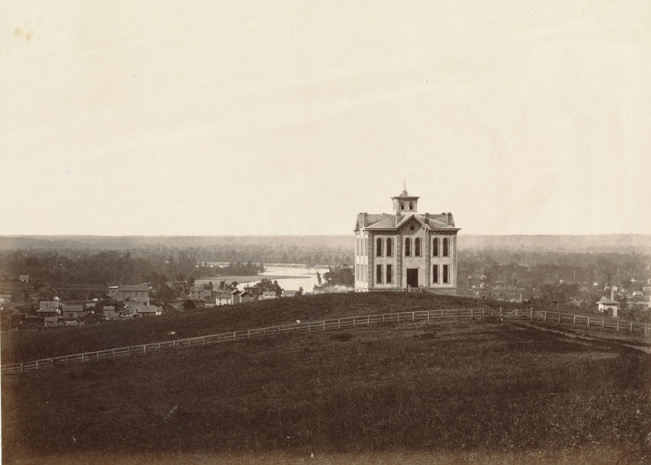 The University of Kansas’ first building, the Old North College, is shown here in 1867 atop Mount Oread. Courtesy of the Boston Public Library.

The precise location of the University of Kansas in Lawrence was actually atop Hogback Ridge, later known as Mount Oread. Its outcroppings of chalk actually gave name to the famous KU chant, “Rock Chalk, Jayhawk.” This prominent piece of high ground was utilized by the first settlers from the New England Emigrant Aid Company when they first arrived in the area that became Lawrence. In August 1863, Missouri Guerrilla commander William C. Quantrill and his band of Raiders used Mount Oread as the assembly and lookout spot for their infamous attack on the town. After Quantrill’s Lawrence Massacre, Federal authorities erected several posts on Mount Oread for the defense of the community. While there were no attacks again on Lawrence after 1863, the closest the Confederates came to attacking it once again came in the fall of 1864, as Price’s Army of Missouri pushed westward toward the border. He was eventually stopped at Westport (modern-day Kansas City) in October and forced south.

Reverend Richard Cordley, the famous preacher who survived both sackings of Lawrence and the first person to receive a degree at the University of Kansas. Courtesy of the Kansas Historical Society.

There are also many graduates and administrators of KU who had prominent roles in the American Civil War. One was Richard Cordley, the pastor of Plymouth Congregational Church in Lawrence, who received the very first degree awarded by KU. Remarkably, Cordley – the “Jayhawker Preacher” – survived both attacks on Lawrence and served as a private in the 3rd Kansas Militia. Lyman Allen, a member of the Board of Trustees for KU, served as the Adjutant General in Kansas during the war. The second Chancellor of KU was John Fraser, who commanded the 140th Pennsylvania Infantry in the Army of the Potomac. When the regiment’s senior officers were killed or wounded during the fighting at the Wheatfield at Gettysburg, it was Fraser who assumed command. This is simply a sampling of the many Kansans affiliated with the university that had roles in the war.

As of 2022, the Border War rivalry between Kansas and Missouri resumes, even though the two schools are no longer in the same athletic conference. The over-150-year conflict between the states maintains its tension and emotion, sparking heated taunts and battles on the court. This is especially true, knowing the University of Missouri-Columbia’s Tiger mascot refers to the Boone County Home Guard during the war. Knowing the history of the rivalry and KU’s remarkable ties to the Civil War gives much needed appreciation and recognition of the school’s history and heritage.

4 Responses to Jayhawks, Mount Oread, Legends, and Lore: The University of Kansas and Its Deep Civil War Ties